Become a Customer
Have a Question?
Fill out my online form. 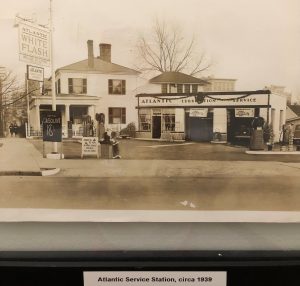 Atlantic Station is still located on the corner of Queen and Shine Street, but unfortunately, gasoline can no longer be pumped for 18 cents a gallon. (See sign at the left).

Cherishing Our Past, Preparing for the Future 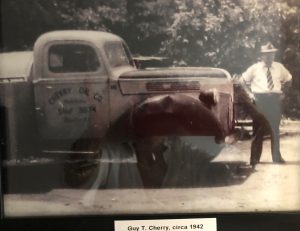 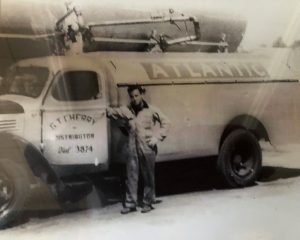 JP Cherry ready to start another day on the road with his trusty truck.

It’s 1928–one year before the start of the Great Depression. There are now four oil companies in Lenoir County, with the newest being the Cherry Oil Company, Inc. (COCI), founded by Guy Tilghman Cherry, Sr.

Guy worked hard to sustain the business through those difficult economic times and then had to persevere further following the death of his oldest son, Guy Tilghman Cherry, Jr. on November 16, 1942. Guy Jr. died in the line of duty while serving our country during World War II.

The third generation began to make its mark in 1975, when Julius Perkins Cherry, Jr. (Jay) officially joined his father, working alongside each employee in every part of the business. Jay currently serves as President and Chief Executive Officer.
In 2007, the fourth generation came calling when Julius Perkins Cherry, III (Jason) formally entered the family business. Jason currently serves as Vice President and Chief Operating Officer. 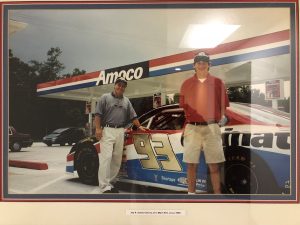 Jason Cherry with his father, Jay, in front of a COCI Amoco station at the corner of Hull and Rouse Roads.

The original site of Cherry Oil Company still stands at 401 Abbott Street in Kinston and has limited business operations.

Since 1992, COCI has worked diligently to structure several acquisitions in Lenoir, Jones, and Wayne counties, including oil and propane operations, as well as branded and unbranded convenience stores. 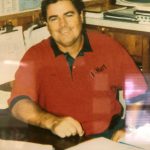 Jay Cherry’s desk, informally known as “the library,” can still be found at 401 Abbott Street. shirt 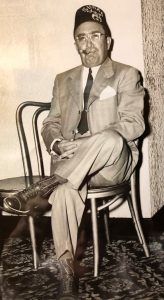 With four generations of wisdom and experience, our family-owned and operated business continues to be built on a progressive approach to providing energy, while continuing to treat both customers and employees with the integrity that sustains a small family business, loyal customers and employees, and continual growth.

At Cherry Energy, we respect our legacy while remaining focused on the future.